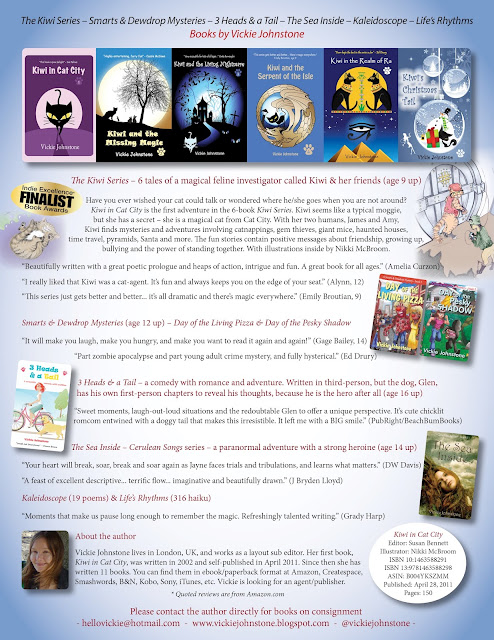 Vickie Johnstone lives in London, UK, and works as a freelance layout sub editor. Her first book, Kiwi in Cat City, was written in 2002 and self-published in 2011, and she has scribbled stories and poetry all her life. Vickie’s loves include cats, reading, films, travelling, rock music, Castle, The Walking Dead, tea, the sea, dancing like an eejit, sleeping and Milky Bar.

Vickie has written and self-published the following 15 books: Kaleidoscope (poetry); Travelling Light (poetry); Life’s Rhythms (haiku); 3 Heads and a Tail (comedy romance with a dog); Kiwi in Cat City (magical cat series for middle grade readers); Kiwi and the Missing Magic; Kiwi and the Living Nightmare; Kiwi and the Serpent of the Isle; Kiwi in the Realm of Ra; Kiwi’s Christmas Tail; Day of the Living Pizza (comedy detective series for young teens), Day of the Pesky Shadow, The Sea Inside (teen/YA fantasy), I Dream of Zombies and Haven (Zombies, book 2). The Kiwi Series has illustrations by Nikki McBroom.

Thanks for commenting - have a groovy day! :)