RIP Mog, the most wondrous cat

Hi! I haven't posted for a couple of weeks. This April has been awful. I've had sciatica since the beginning of February and after 6 weeks it faded, only to retun a week later. This time around it was so bad that I couldn't walk further than my kitchen - if anyone gets this, I feel for you and hope it improves soon! I went back to work a week later still in pain and on painkillers that made me feel like I was underwater. It was a weird choice - bad pain or less pain but with a mind that felt like bubbly washing-up liquid and it took a lot to focus on anything at all. I'd go home and just want to crash = no writing.

To top it all, my beloved cat's illness got worse and I had to rush her to Wanstead Veterinary Hospital on Monday 20 April and she passed away the following day. In July, she would have been 16.

She was an amazing cat, a great companion and almost 'human'. I am missing her like crazy at the moment. Grief is a strange thing. It leaves a pit in your stomach that you can't fill and you have to wait until it fades. Unlike physical pain, it gnaws away and you feel helpless. The loss is indescribeable. The house feels very empty and very quiet. I think I can honestly say that I never felt lonely with Mog. I will write about her at some point or post a poem, but I can't at the moment. She was a wonderful, beautiful, amazing kitty with eccentricities and quirks, and a huge vocabulary. 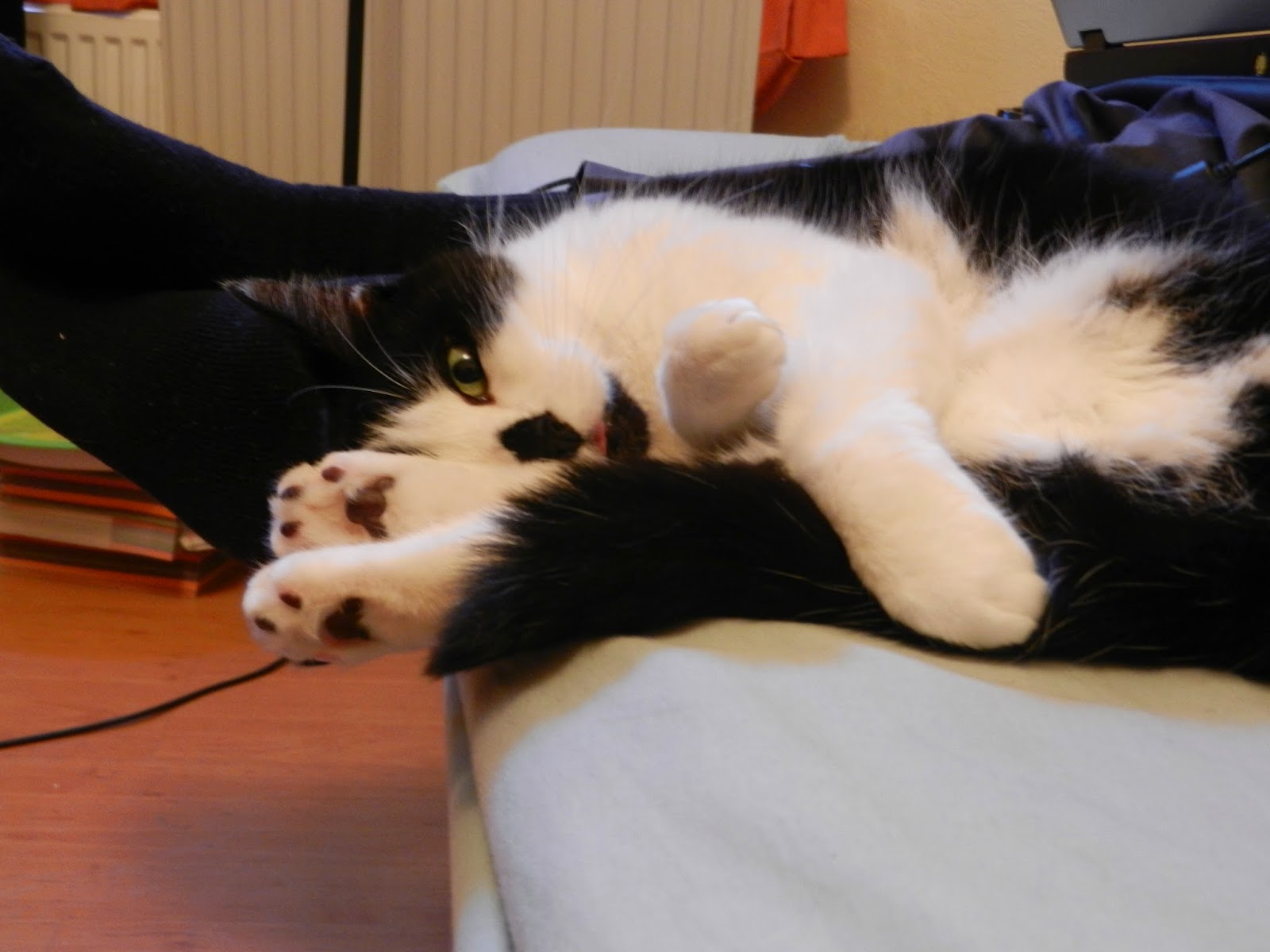 Posted by vickiejohnstone at 16:35 No comments: Links to this post

Flash fiction 6: It's the silence #2minutesgo

Hi! Today, I'm posting a little bit of flash fiction that I wrote for JD Mader's 2-minute writing challenge. It's on his blog, Unemployed Imagination, every Friday if you fancy a go. Cheers.

It’s the silence at the end of the world she wants, where the edge spills into nothing. A void as fathomless as it is wondrous. A place so still that everything will stop. No sound, no words, no colour. She imagines it grey. Neither black nor white, for those two opposites hold no meaning.

Only grey tells the truth and casts a mirror up for all to see their flaws, their holes, their beauty – who they really are deep inside. For when the world finally rolls upon its side the only thing worth knowing will be the grey. The only thing left to hold. She dips her hand into the river and spreads her bony fingers wide, letting the water drip, drip, drip… away.

Posted by vickiejohnstone at 19:40 No comments: Links to this post

Remember when you used to see monsters in the patterns in your curtains, checked under the bed for things that might go bump in the night and found faces in the clouds - well, I still do the last one!
This one is about that kind of thing.

The world paused upon an echo
And it was just me,
Pointing a finger up at the sky,
Questioning, wondering why;
Would it fall if I asked too much?
Did tears plunge in a tumult of rain?

I decided it best not to ask
In this moment,
Staring wide-eyed as the world moved,
Shifting in its seat like an aged crone
Smothering the air with moronic laughter.

I whisked down my hand in fright,
Far away from the sweeping black crow
Upon whose wings my imagination flew -
Painting witches and toads riding brooms
As gems dazzled in dark cavern tunnels;
Conjuring spiders spinning silvery silk
By roaring waterfalls of leaping goldfish.

They urged me to play with them all
In a time forgotten to children like me.
Yet in that moment
As I stood frozen in awe
Another hand reached out
To pluck mine own.

It swept me away, back inside
As the world did yield its secret:
What you dream and what you see
May or may not come to be.

copyright Vickie Johnstone
Posted by vickiejohnstone at 18:13 4 comments: Links to this post

The time was for the taking
The day eaten by the night
A still, arched moon
Breathed
Against the howling wind
Like a curse

“Are you going my way?”
She asked the profile
Flicking a smile
Opening her hands
Clean, so bare
Like innocence

In her hands she carries it
All, despairing
Slipping into the car
Too close to him
Offering a smile
Like a child

copyright Vickie Johnstone
Posted by vickiejohnstone at 19:52 No comments: Links to this post