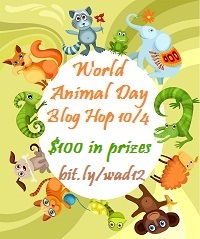 Sponsored by Terri Giuliano Long, author of In Leah’s Wake,
and David M. Brown, author of the upcoming Man vs Cat

High up on the road
Swifts soar as blue tits twitter,
Sounds of spring fly in

Hands up who likes animals? Hands up who lurrrrrves animals? All those fluffy, feathery, cuddly, cutesy, intelligent, faithful, funny creatures who share our lives and make our day. Mmm, I can see a big show of hands. Let's give a big cheers for their day! Grunt, eeeek, mew, voof, grivvet, splish, splosh, baa, moo, oink, neeeiiiigggh!

I love animals, especially cats. My first pet was a dog called Glen. I can't remember much about him, as I was really little, but we used to take him for walks along the marshes and fields where I lived. Glen was always chucking himself into the water whenever he could and shaking himself all over us, like a big dirty shower. I recently wrote a doggy character in a novel called 3 Heads & A Tail. I gave the dog the best lines, the best love story, brains and adventure, and I named him Glen. Recently, my dad told a story about this dog. My dad used to work on the railway and there was a rail yard where we lived in Slade Green. He'd hang out there with the other drivers and they were very friendly. I can't remember if this happened there or in a pub, but Glen, accompanying my dad, decided that he wanted to be a bit more human. Up he jumped on to the table and started lapping from some poor guy's pint! He got himself banned. He was a character!

We had loads of animals when I was a kid. The best time was when I was at Infants School and we had an aviary at the bottom of our garden. It was huge (or at least to me) and my dad built it. He bred a rainbow of budgies, which I thought I could communicate with simply by winking, and little bluish quails that pecked along the ground. The aviary was like a giant house of wonder. It had two doors. You walked in, closed one, and then walked through the next, so the birds were safe. Inside, I'd hold out my hand and the budgies would fly around tweeting and land on my palm, and look up at me. To a kid who loved animals, it didn't get any better than that.

We then moved to Erith, to a house on the corner of a street. We didn't have a huge back garden. It was kind of square, but my dad created a pond (as he did wherever we lived) and filled it with fish. During that time our animals included: 2 rabbits (Snowy & Harvey); 2 dogs (Penny & Bianca); at least 4 cats that I can recall (Misty, Mitzi, Buster & Smokey); another cat that someone asked my mum to take in, which turned out to be pregnant; 2 guinea pigs; 2 red-crested black newts; gerbils, which started off as 2, and sprouted; a cockerteil; a canary; some budgies (one was mine, called Pip); numerous fish; a duck that my mum took in from someone who knocked on our door, which vanished around Easter, making me very sad; and a tortoise called Tonic - we knew this because his name was painted on his shell, and he wandered under the garden gate one day, stayed a few weeks, and then wandered off, like a travelling gypsy with a shell. Add to this the numerous birds that my dad rescued from the garden, which would live in a box by the radiator for a while, before being released into the blue yonder. Oh, and a frog that my mum saved from Buster.

As I grew up, our furry family grew fewer, but we still had many pets compared with most people. We almost had a house rabbit. It was sooo cute and black, and tiny. My mum bought it during the week we were due to move to Cornwall. Cue the chaos of moving, particularly chaotic when it's about 250 miles away to the new home. Somewhere in the middle of the journey, on the motorway, my mum realised that she'd left the bunny in the toilet. Not 'in' the toilet (what were you thinking?), but in the room! He'd been put in there for safekeeping while the removal men were taking out our stuff. Panic set in as my mum rung her friend to contact the family who had bought our house. Happily, bunny was rescued and had a new owner. I always wondered what it would have been liked to have a house rabbit.

My first pets as a grown-up were two cats called Amy and Kiwi. Somehow they managed to get pregnant by the same smoky coloured tom (I could tell by the markings of what came later!) when they weren't even 6 months old (that taught me to get to the vet with a female cat asap!). I saw both cat births. Amy was first and she helped Kiwi with hers. It was fascinating. David Attenborough would have been impressed. Amy had 6 kittens and Kiwi, who was smaller, had 4. For 6 brilliant weeks I was greeted at the door by 10 stampeding balls of fluff and followed everywhere around the house. I'd wake up every morning to them all sleeping on me. Bliss. Of course, I couldn't keep 10 kittens, but I had an excellent local pet shop, run by a woman and her daughter, so 8 of my kitties went there. My mum wanted the ginger one with golden eyes, whom she named Charlie, and I persuaded her to take the little runt of the litter, who was a tough little fighter, called Lily.

Alas, I lost Kiwi when she was only 6 years old, but I immortalised her in Kiwi in Cat City, and I'm still writing this series set in a world of catizens.

Today, I just have one pet. She's 13 now and her name is Mogsy. I can't imagine life without her. She's one of a kind.

I'll finish with a poem about two animals:

The fox and the mole

Ok, said the mole
But you know I can’t see
I can burrow real deep
But I might fall asleep

Well, said the fox
I can offer my cunning
I will find a way inside
And to you I’ll confide

Well then, asked the mole
What do you suggest we do
To steal all the money
But not do anything funny?

Aha, said the fox grinning
I’ll tell you what to do
Just burrow under the bank
While I drive up in a tank

Oh, said the mole frowning
I never thought of that
I didn’t know foxes could drive
Have you told this to your wife?

No, we have to keep this secret
Said the fox to the mole
As she’ll have my guts for garters
And that’s just for starters

So off went the fox and mole
To begin their bank robber life –
They rivalled Bonny and Clyde
Living it up, the law they defied

Thanks for commenting - have a groovy day! :)