Before we begin this interview, we have to announce that it has been commandeered by one of Paul Kater's own creations... Hilda the wicked witch... she zoomed in on her broomstick, scowled at me and, well, what could I do? I had to give in or be turned into a frog, so here goes... 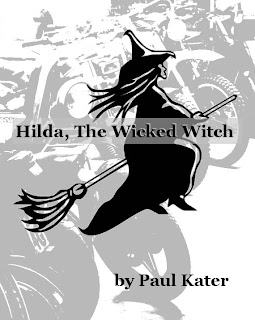 What is your day job or are you lucky enough to write for a living?

I'm a witch. Hilda the wicked witch, as some call me, but I am just a witch with a mind of her own. You know, like WITCH – Witch In Total Control of Herself. Although my scribe may argue about the control part, but since he's not here...

What books have you written so far?

None, except my book of shadows, but that's just for me. My scribe has been busy making all kinds of notes of the things I had to endure thanks to him, and he prides himself on it too! At this moment there are 7 books of my adventures out on Smashwords.com and also on Amazon.com. If that means anything to you. My scribe would, of course, also tell you about 3 ‘steampunk’ books, whatever that is, but they are not about me, so they are not important.

What works in progress do you have?

Oh, you wouldn't believe! There is one book in the making, which should be available next month, where I and my man, William, have to face yet another dragon. Scribe calls it ‘final editing’, which really means he was sloppy when writing it. And then there is a start with yet another adventure which takes us to a faraway place, to a woman I was in school with. She has a divinity complex, but mum is the word on that for now.

How long did it take you to write your book/s?

My scribe started writing down my adventures halfway 2009, he says. And up until now he wrote the 7 I mentioned. Well, almost 8, I'll grant him that. But it seems he is slacking a bit.

Do you write linear, or jump back and forth? Do you plan or write by the seat of your pants?

What I sit on is none of your business and, since you are a woman too, you should know what it is. Oh, wait, you mean something else. No, my scribe is not the jumpy kind, and that is good. He'd make the cats nervous. He starts at the beginning and stops at the end, and trust me, there are plenty of surprises in store for him between these two places!

Why does your scribe write?

Because he doesn't have a life and I do. He, of course, claims that it is to relieve his creativity, but, honestly, who'd believe that?

How long has your scribe been writing?

He seems to be at that since long. Since high school or so. But that was not serious. That was not about me.

Where and when does he write? ­ Does he have set times?

My scribe is terrible with that. He writes where he can, when he can because, get this:
"I never know when a good idea comes along, and then I have to write it down immediately."

I am most like me, of course. I love myself the way I am, and I also love my wizard. I do believe that my scribe thinks he is a bit like my wizard, but that can't be of course. Scribes have flying pens, not flying brooms.

What/who inspired him to write and still inspires you?

He never told me, and he never mentioned anything like that. I know he's been reading as much as he can all of his life, all kinds of books, and that gave him the idea to give writing a try.

What do you think is the ideal recipe for a good novel or story?

Stories like mine! Drag the reader in by the eyeballs and don't let go until they're through with the book. A bit of fun, a bit of serious, and not dragging things out too long. Keep the person reading interested, wanting to see what's around the corner. That could, of course, be a big troll, but there's always a risk.

Have you ever felt your character is based on someone from real life?

Felt like that? No. But my scribe insists that he had his inspiration for me from one of his dearest friends, who lives near Seattle in the United States, in that crazy world of yours. He goes so far as to call her "dear" and "love". He knows her for over 15 years, which gives her an unfair advantage over me.

Animal: cat (I'm a witch).
-- A woman after my own heart!! Vix
Food: anything natural.
Drink: coffee, tea and wine with water in it.
Film: I'll let you know when my scribe explained what that is.
Colour: purple. Is there any other colour?
Band: there was a quaint group of troubadours in the village last month. Do they count?
Song: the wytches' chant of course.

You’re walking in the forest and you bump into an alien librarian from Mars. He wants five book recommendations from you…

Scribe's turn:
The series from A Song of Ice and Fire, by George R.R. Martin
The Hilda the Wicked Witch series, by Paul Kater

Who is your favourite character from any book and why?

I'd say my best friend, Baba Yaga. I really cannot understand why my scribe says "Paul Atreides from the Dune series. He arrived on the planet of Arrakis not knowing anything, facing many dangers and enemies, and overcame them all by becoming one of the planet's original inhabitants. It reminds me so much of my favourite movie, Avatar, where a disabled marine, Jake Sully, does the same thing."

Who is your hero / heroine?

Do I really have to answer that? Because I would say William, my wizard, but I have to say my scribe.

Which book do you wish you had written?

One where my scribe has to go through all of the crappedy crap he puts me through.

Which three authors would you like to take to the pub?

Are you published or self-published? What is your experience?

My scribe does it all by himself. And he growls and mutters, and changes and rewrites, and uploads and downloads, and is not happy and does it again until he is happy. I think he likes it.

How do you find the marketing experience? Any advice for other writers?

I think he is still looking for a good way to do that stuff. And for that he hangs around other writers a lot. Instead of spending time with my adventures, I might add.

Does your scribe have a blog? What does he blog about?

Blob? Oh wait, he explained that. He does. He writes about a lot of stuff. Paper books, electronic books, ideas he has about stories and writing, about the publishing world and so on.

What other hobbies does your scribe have?

He goes to the gym and he plays music on a few things, such as piano, accordion, a guitar, a flute and an Irish hand drum. My scribe also likes to read, but most of the time those are books he did not write himself.

What would you like to achieve in the next five years?

Scribe's turn:
I'd like to write more Hilda books, and also put out some books in other genres that I like to write, like steampunk and Sci-Fi. The next book of Hilda is the first one that will be for sale (the others are free) and I would like to see that I can cut down on my regular job hours from that, so I can dedicate more time to my writing.
---I know the feeling! I second that!


If you won the Lotto or a major publishing contract, what would you do with that dosh?

Scribe's turn:
I would definitely cut down on job hours, and try to make the plan of moving to the Seattle area come true a bit sooner than I envision happening now. Writing would then become my main activity.

Complete one of these stories in 100 words or less…

In the deep and darkest reaches of the dank forest... runs a little brook. Its water is crystal clear, and has never been seen by a human eye. Fairies fly around, protecting the area, making certain that this part of the woods is forever safe.

What question do you wish I’d asked and, of course, what is the answer?

Do your fans love you? And the answer is YES!!
Book links:
Hilda the wicked witch - https://www.smashwords.com/books/view/19628
Paul's other books can be found here at the side of this page.
Thanks Hilda and thanks to Paul Kater for managing to squeeze the odd sentence in around the crazy woman with the weird pointy thing on her head...
Posted by vickiejohnstone at 15:37