These lyrics sealed the deal when choosing a song for the beginning of Hearts in Exile. The farther I got into the story and later drafts, the more I saw a theme emerging. It made its first appearance in Chapter Eight when young Loralee and Sir Robert (Igrorio) are out riding and she finds an injured butterfly…

Gently, she reached down to the grass, where a butterfly struggled to take flight. One of its wings was crooked, probably broken.

“That’s too bad,” I said, and was about to find something else to occupy my attention when Loralee touched the butterfly’s broken wing with one finger and rested the palm of her other hand on the ground beneath her. Eyes closed, her mouth moved silently. A brief glow covered the insect, she withdrew her finger, and the butterfly fluttered both wings. It took flight a second later.

I stood there with my mouth hanging open, watching it fly around Loralee’s head. It landed on her nose as if to say ‘thank you’, and she giggled. Then, it flitted off over the grasses until I couldn’t see it anymore.

She must have healed me like that, too. Amazing… and clearly beyond my comprehension.

Scratching my ear, I asked, “Is there anything you can’t do?”

That little scene said so much about Loralee’s character as compassionate healer, and like the butterfly, she was gentle and beautiful. At the end of that snippet, you catch a hint of what she longs to do with her life. She wants to follow her dreams, to become a great healer, to be free to fly.

Yet, just like the wheel broke the butterfly in the song lyrics above, fate crushed Loralee’s dreams and she never got the chance to fly… not until she became a Dragon Keeper.

With that in mind, I brought back the butterfly theme during a rewrite much later in the story after Sir Robert and Loralee were reunited on the island with the dragons. It brought tears to my eyes, seeing the symbolism come full circle. Sir Robert, having just found Loralee again after ten years, is desperate to keep her safe from a threatening dragon, but he’s grown too protective, doubting the strong woman she’s truly come to be. Here, in Chapter Thirty-Six, as he’s alone and brooding about how to keep her from harm, he realizes what he must do…

I stared into the water of the tiled pool. A spotted butterfly flew from one of the bushes, flitted close to the current flowing from the wall, and landed on my hand. I held it up, smiling at the tickly sensation as it crawled up my finger. Tiny water droplets weighed its wings down a bit, and I started to blow on them to help them dry. The butterfly wobbled under the force of my breath and retreated to the very tip of my finger.

Deciding to leave it alone, I simply held my finger steady and watched as it lifted and lowered its wings again and again. Between the gentle movements and the sun’s warmth, it was soon dry. One more flutter, and it lifted from my finger, flitting back toward the bushes.

Smiling down at the figurines Loralee had taken such great care in carving, I said, “So, that’s it, hmm? I can be there when she needs me, but I’ve got to let her fly.”

Loralee had to be given the chance to prove herself, even if it put her in danger. Sir Robert had to learn to trust her abilities, even though it went against his paladin nature. Think about that. We can pin butterflies down and preserve them as specimens forever, but their true beauty is only seen when they can fly free, with their colourful wings glimmering in the sunlight.

And isn’t that true for us all?


Buy one copy (print or electronic) of Hearts in Exile at Melange Books, Amazon, B&N, Smashwords, or All Romance E-Books, and you'll be entered into a drawing to win this BIG prize pack:

To enter, just purchase a copy of Hearts in Exile from any of the online retailers above and email your receipt to Mysti Parker at this email: mystiparker@yahoo.com. Drawing to be held on August 1, and it is open worldwide!!! 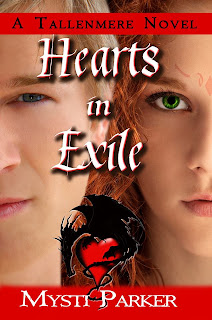 Somewhere, hidden in the waters of the Southern Sea, lies an island unlike any other. Within the amber glow of its pyrogem-laden cliffs, legend says the very heart of the dragon god Drae keeps the island and its occupants alive. Loralee Munroviel, daughter of Leogard's High Priestess Arianne, had no idea what she would face when she arrived by boat ten years ago and was left alone in exile. All she knew about Draekoria's inhabitants was written in one tattered notebook. Now her life revolves around keeping Drae's descendants happy. Never in her life did she imagine being a Dragon Keeper.

Captain Igrorio Everlyn, known as Sir Robert to his unit of Holy Paladins, has faced his share of hell, battling the evils of Emperor Sarvonn's tyranny and the dark god Tyr's abominations. But none of that compares to the ten years of hell he's spent without Loralee, presumed dead. One freak storm changes everything. Now the two of them must fight to re-establish the delicate balance of the island before the dragons take things into their own hands. Through it all, they discover the secrets that kept them, and their hearts, exiled for a decade.

After a shipwreck, Sir Robert wakes up in a strange cottage, only to find Loralee, the love of his life, whom he thought had been dead for a decade…

“I don’t understand. What is this place?”

“It’s an island. Very few know of its existence.”

The words wouldn’t come. My racing mind pitched in to help. Unless she didn’t want to marry me after all.

Wrenching pain I’d kept tucked inside broke free, and I clambered to my feet. Loralee followed suit, backing herself into the small dining table.

I tried, but could not hide the bitter anger in my words. “How could you do this to me? Do you have any idea what I’ve been through?”

Her eyes widened. She clutched the table with one hand and her robe with the other. “What you’ve been through? I didn’t want this. I was forced here.”

“What do you mean, forced here? Where are your shackles?” My voice roared through the little cottage as I gestured around me with one arm. “Where are the bars? This looks like no prison I’ve ever seen.”

Her voice cracked the air, rivaling with my own. “I was betrayed, forced into exile. Don’t you understand? I never wanted to leave you. I never wanted anything so much as I wanted you.”

Pacing away, I closed my eyes and breathed deeply. I had to calm myself, to let the weight of this discovery, the improbability of her explanation to sink into my water-logged brain.

I couldn’t bring myself to look at her just yet, so I stared at my bare feet instead. “Why didn’t you tell me, write to me?”

“I tried. I begged the supply ship crew to bring my letters to you. They always took them, but never brought one in return. I suspect they destroyed them, but I had no way of knowing.” She sucked in a shaky breath as though trying to hold back her tears. “I never stopped loving you.”

Turning back to face her, I felt like a mindless beast. Here I was, raging against the love of my life when she’d all but been brought back from the dead.

“Loralee.” I eased toward her. She cringed. “I’m sorry. I didn’t mean to scare you.”

Without a word, I leaned in and pressed my forehead to hers, allowing myself to breathe in her scent for the first time in a decade. We stood suspended like that for a while, lost in time, and emerging from a purgatory neither of us had imagined ten years ago. I would have been content to stand like that forever, but Loralee burst into tears and wilted to the floor.

I followed her down and opened the quilt to wrap us both inside. I held her tight while she cried.

I finally got enough breath to speak again. “What did you mean by forced here? They told me you were…” I couldn’t say it, not with her warm and so very alive against me.

The weight of it all came crashing down on me. “This is my fault, isn’t it? You’re here because of me.”

She made no attempt to wipe her cheeks, but shook her head and stared at the rafters as though entreating the gods. “No, it’s not your fault. Not at all. There is so much to explain, I don’t know where to start.”

I couldn’t comprehend any of it, so I focused on the here and now. “You found me on the shore?”

“The crew, Francis…did you find anyone else out there?”

The familiar weight of grief squeezed my chest, and a few more tears escaped before I could stop them.

She pulled me close and whispered, “I’m so sorry. I know how much you loved him. We all did.”

“We all grieved for you. You’ve been here…all this time?”

“By the gods, Loralee, I’ve missed you so much.” I put my wet cheek against hers and pressed my lips to her soft skin. “Part of me died the day I thought you… please…just tell me how you ended up here.”

Loralee took a few deep breaths and finally pulled away from me. She caressed my cheek and smiled weakly.  “I’ll make us a pot of tea. And then, I think we should start at the beginning, back to the Great Plague and when we first met. Do you remember that?”

Smiling past the sadness, I covered her hand with mine and closed my eyes. “How could I ever forget?”

Mysti Parker (pseudonym) is a full-time wife, mother of three and a writer. Her first novel, A Ranger's Tale, was published in January, 2011, by Melange Books, and the second in the fantasy romance series, Serenya's Song, followed in April 2012. The highly anticipated third book, Hearts in Exile, has already received some great reviews. The Tallenmere series has been likened to Terry Goodkind's Sword of Truth series, but it is probably closer to a spicy cross between Tolkien and Mercedes Lackey.

Mysti reviews books for SQ Magazine, an online specfic publication, and is the proud owner of Unwritten, a blog voted #3 for eCollegeFinder's Top Writing Blogs award. She resides in Buckner, KY, with her husband and three children.

You can follow the rest of the tour here:
http://pageturnerbooktours.com/now-touring-hearts-in-exile-by-mysti-parker/ 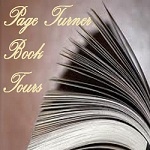 Thanks for reading!
Posted by vickiejohnstone at 12:03